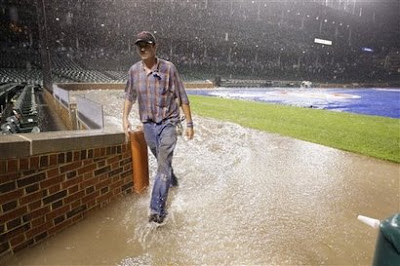 With the Cubs at 22 games over .500 for the first time since the Boys of Zimmer years, we ventured to Wrigley Field to see if they could continue their assualt on the National League Central and become the first Cub team to play in back-to-back post seasons since 1908.

Catching up on some old items:

How much longer will Derrek Lee be allowed to bat third? Lou Piniella got Lee a night off last night. Good. Now, he better respond or Lou needs to move him lower in the order.

Nice work by a certain cell phone company that subsidizes a certain taxpayer funded stadium south of Madison in Chicago. Ever been to Wrigley's upped deck eating area that's above the marquee? It used to have tremendous views of the Chicago skyline.

Not so much anymore. 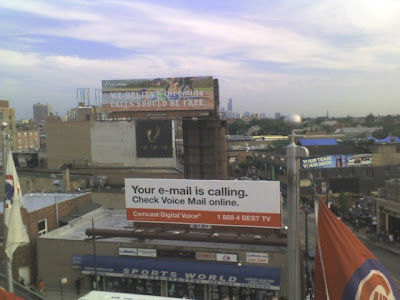 Just how great is Geovany Soto?

Carlos Zambrano made that revelation after Sunday's victory, saying Soto "says some crazy things to motivate you" and had gone to the mound in the second inning pretending he was talking to Zambrano. But he said nothing.

"I like to have fun," Soto said. "We've still got a job to do, we have to win games, but I just come in here and have fun. You can't be all pressured out out there. … You've got to keep 'em loose and do your job."

When did Michael Barrett start playing first for Milwaukee? And get so fat? And was there ever an athelete in a fight that was more passive than Manny Parra? Ned Yost really, really, really needs to keep his job until October.

The next five days could be huge. With Milwaukee potentially collapsing and the Cubs facing Houston and then the Cardinals, the Cubs lead in the division could grow rapidly. It would be a good idea if they did this now given that they close the season with 16 road games in their final 26 games.