The most exciting team in Chicago right now is the Chicago Blackhawks. Yeah, the Bears won a "thriller" last night, but even when that team tries to win in exciting fashion it's boring.

Now, this writer knows less about hockey than most people have forgotten. One of the hosts over at Hockee Night can verify that I don't know a center zone trap from a mouse trap.

And, in case you haven't heard, they are playing at Wrigley Field on New Yearse Day.

Some folks are embracing this event because it's a Wrigley Field event. Not surprising as their enjoyment of an event is enhanced more by venue than by product. Ivy Chat embraces this as a potential national coming-out party for the next great team from Chicago.

In 1984, that game was the Bears-Raiders game at Soldier Field. The Bears knocked out 3 Raider quarterbacks that game (the Raiders only lacerated Jim McMahon's kidney).

So Much For Detente

This is just too funny not to highlight and too dead on accurate.

If Ye Seek, So Ye Shall Find

Lincoln Park's Wiener's Circle was shut down Friday by the city for failing to meet Chicago's health code.

The restaurant at 2622 N. Clark St. — popular among late-night revelers who trade rated-R banter with employees — was found in an inspection not to have running hot water. That means employees could not properly wash their hands or cooking utensils, the Chicago Department of Public Health said in a statement.

Wiener's Circle was also cited for having food at unsafe temperatures. An inspector found two pounds of cooked onions at temperatures lower than the required 140 degrees.

As a frequenter of this fine dining establishment, I am shocked, just shocked to learn that their onions are not heated high enough.

I am further shocked that this, and a lack of hit water, were the only violations discovered. I mean, have the inspectors ever been there before? The cleanest thing about the place is the language.

This also further begs the question of why they were shut down for such measly violations. Perhaps they refused to give outgoing Illinois Governor free hot dogs in exchange for consideration of an appointment to the Illinois Department of Public Health.

For the many years now, Broadway has been happy to cull their productions from movies. Beauty and the Beast, Shrek, and Marry Poppins have all transitioned from the silver screen to the live stage. It appears now, that George Lucas is getting in on the act:

Just when it appeared that George Lucas had finally laid to rest his epic saga of Jedis, Wookies and Ewoks, he has announced that Star Wars will return as a stadium experience.

The Times has learnt that Lucasfilm has authorised Star Wars: A Musical Journey, a retelling of the story that will combine excerpts of the film with live orchestral accompaniment.

Diehard fans may dream of Jedi Knights serenading Jabba the Hutt and C-3PO singing "Don't cry for me, R2-D2" but they are likely to be disappointed. Producers for the show, which will have its world premiere in Britain, emphasised that although actors would be used to narrate the story, it would not be a stage musical.

That's too bad that it won't be a musical. How terrific would this song have been:

Let's go out with something really hot for these folks, alright? A big hit on the '77. [ singing ] "Ah.. Star Wars! Nothing but Star Wars! Gimme those Star Wars.. don't let them end! Ah.. Star Wars! If they should bar wars.. please let these Star Wars stay-ay! And, hey! How about that nutty Star Wars bar? Can you forget all those creatures in there? And, hey! Darth Vader in that black and evil mask - did he scare you as much as he scared me-e-e-e?"

Options Narrowing for the Candidates 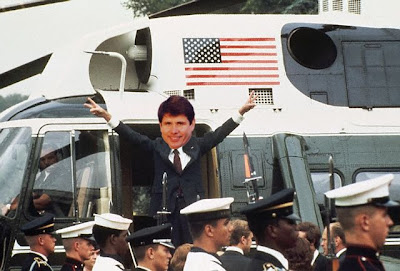 While the world waits for Rod Blagojevich to have his Nixon moment, and Sam Zell worries about what might be on tape regarding his editorial board, the Phillies signed Raul Ibanez to a 3 year, $30 million contract.

Where this helps the Cubs is in their pursuit of a new right fielder. The candidates are to be down to Bobby Abreu and Milton Bradley. Neither one of these guys is a guy you want long term. Even three years may be too long for these guys as Abreu is too old and Bradley is too insane.

So, can you get these guys for less than 3 years? Sure, but you just have to pay more per year. A contract offer of $12 million per year for 2 years probably gets it done. Three years at $10 million per year has a present value of only $4.9 million more than 2 years at $12 million. The risk in a 2 year deal for Abreu and Bradley is that they could not get a contract in 2011 for $4.9 million.

That seems like a reasonable risk for either player.

The Cubs Next Chapter - Number 11

At CNBC, the've been following the Trib bankruptcy very closely:

Rubin told me that a parent corporation can file for bankruptcy without the subsidiary filing. The point of doing this is to make it easier to sell the Cubs without all the rules associated with the bankruptcy court, including timely filings of financial information. Another bankruptcy lawyer friend of mine told me that it would also allow the Cubs employees, and anyone associated with dealing with the Cubs, to better operate on a "business as usual" basis.

This all does not mean, however, that the Cubs sale will be free from everything that goes on with the bankruptcy because the creditors will still get the proceeds from the sale of the team. And who knows what's going to happen with free agents? You think the court isn't going to get involved if the Cubs sign a big free agent like Jake Peavy or Bobby Abreu in the offseason?

What this means is that the court will be very involved in the sale process. There can be no sweetheart deals now for the John Canning's of the world. The team will go to the highest bidder. Anything less and the creditors would petition the court to accept the higher offer (a higher offer yields the creditors more cash to retire debt).

Now, one supposes that the #2 bidder could win out if their bid was so close to the #1 bid that the creditors would only see a negligible difference in proceeds received.

As long as the court knows that the best deal for the creditors is the one accepted, the court will stay out of it. If a Mark Cuban rides in with an offer 10% above the prevailing offer, it's going to be hard for the court to reject his bid.

What's also going to be interesting to watch is if there was a bid placed by Tokarz/Malek group. We haven't heard from them in a long time. One bets that they are out as their bid was backed by a publicly traded entity. Such an entity could, one day, end up just like the Trib.

Tribune Co. has been struggling under a $13 billion debt load since real estate magnate Sam Zell took the company private last December in an $8.2 billion leveraged buyout. The company faces a deadline today on $70 million of unsecured debt it took on before Zell's deal.

In a news release, the company said The Chicago Cubs franchise, including Wrigley Field, was not included in the Chapter 11 filing. Efforts to monetize the Cubs and its related assets will continue, the company said.

This is hardly surprising. But it does raise a lot of questions that would be great to ask someone who has access, someone like Sam Zell or a Crane Kenney.

Despite the Cubs not being part of the filling, will the bankruptcy court have to oversee the disposition of assets?

What does this mean about Major League Baseball approving a new owner?

If Section 363 applies to the sale, does a court approved offer get to be outbid in "higher or better" offers by anyone in the public?

What does this do to the timing of the sale? Faster or more drawn out?

The filing probably means very little in terms of the Cubs operations. The Cubs remain an independent company, bankruptcy remote from the Tribune. But the long term health of the team is tied to the change in ownership. And that's all up in the air right now.

This is where the fun begins.

For the comparative, here's the one from last year.

Opportunities On The Cheap

The Cubs need outfield help and they probably can’t lock up long term dollars towards the position due to contracts already on the books, a parent company with a bond rating that aspires to be classified as junk, and uncertainty over their future ownership.

Fortunately for the Cubs, there’s a glut of outfielders who could help in the short term, but are probably not guys you want on the team for more than two years. With Adam Dunn, Pat Burrell, Bobby Abreu, and Manny Ramirez all on the market, the supply of power hitting outfielders probably outstrips the demand.

And this creates an opportunity for Jim Hendry.

Instead of offering one of these guys 4 or more years at $13 million plus per year (or $20 million in the case of Scott Boras / Manny Ramirez), Hendry could offer one of them two years at $15 million per year. Or, maybe even better, one year at say $17 million.

Sure, these guys could all pass. But they aren’t all getting long term huge deals. Maybe one of them would be gutsy enough to take a one year deal. The upside would be that, should the player have a great year, the supply of outfielders after the 2009 season could be smaller and that would still land them a long term deal.

The choice here would be Abreu in right for one or two years.

Only Three, Or Are There More?

The Tribune is reporting that:

At least three prospective buyers have submitted a new round of bids to Tribune Co. for the Chicago Cubs, one of professional sports' trophy franchises.

Sources declined to comment on the size of the three bids, which include the team, Wrigley Field and Tribune's 25-percent stake in Comcast SportsNet, a regional cable sports network.

It was unknown at the time this report was filed whether two other prospective buyers -- Houston businessman Jim Crane and Mark Cuban, owner of the Dallas Mavericks basketball team -- had submitted new bids.

While it's disheartening to not see Cuban's name as one of the confirmed bids, that negative is more than offset by not seeing John Canning's name among the bidders.

While Cuban should remain the horse all Cub fans are backing to win because it's possible to project how he might be as an owner based upon his tenure with the Dallas Mavericks, fans might want to place their show bets on Tom Ricketts. Ricketts is a younger guy who would have the wealth, and ego, to run the Cubs like his personal yacht.

Canning-type guys want the team as part of a portfolio acquisition strategy. We've seen that over the last two-plus decades under the Tribune.

'Tanks, but no 'tanks to that bridge to nowhere.

Bux and ego are what we want to see. It may be one of the three mentioned, it may be someone not mentioned. The guy that finally wins with the Cubs will get his ego filled in a way no one ever has in the history of Chicago. Regardless, may that guy be 30 days away from owning the Cubs.