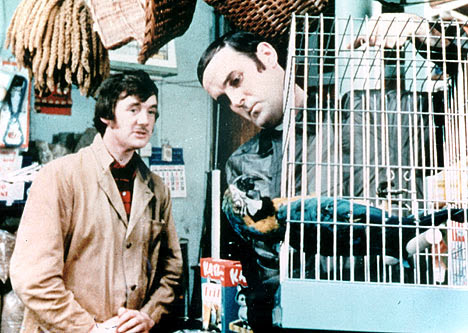 A customer enters a pet shop.

Mr. Shlabotnik: 'Ello, I wish to register a complaint.

(Broadcaster Ron does not respond.)

Broadcaster Ron: What do you mean "miss"?

Mr. Shlabotnik: I'm sorry, I have a cold. I wish to make a complaint!

Mr. Shlabotnik: Never mind that, my lad. I wish to complain about this baseball team what I watched not half an hour ago from this very stadium.

Mr. Shlabotnik: Look, matey, I know a dead team when I see one, and I'm looking at one right now.

Mr. Shlabotnik: The plumage don't enter into it. It's stone dead.

Mr. Shlabotnik: All right then, if ere's restin', I'll wake him up! (shouting at the batting cage) 'Ello, Mister Ramirez! I've got a lovely fresh cuttle fish for you if you show...

Broadcaster Ron: There, he moved!

Mr. Shlabotnik: No, he didn't, that was you hitting the cage!

Mr. Shlabotnik: Yes, you did!

Broadcaster Ron: I never, never did anything...

(Takes team out of the cage and thumps it on the counter. Throws it up in the air and watches it plummet to the floor.)

Mr. Shlabotnik: Now that's what I call a dead team.

Broadcaster Ron: Yeah! You stunned him, just as he was wakin' up! Cubbie Blues stun easily, major.

Mr. Shlabotnik: Um...now look...now look, mate, I've definitely 'ad enough of this. That team is definitely deceased, and when I watched it not 'alf an hour ago, you assured me that its total lack of movement was due to it bein' tired and shagged out following a prolonged energy burst from Carlos Zambrano yelling at them.

Mr. Shlabotnik: PININ' for the FJORDS?!?!?!? What kind of talk is that? Look, why did they fall flat on their back the moment they got home?

Mr. Shlabotnik: Look, I took the liberty of examining that team when I got it home, and I discovered the only reason that it had been sitting on its perch in First Place was that it had been NAILED there.

Broadcaster Ron: Well, o'course it was nailed there! If I hadn't nailed that team down, it would have nuzzled up to those bars, bent 'em apart with its bat, and VOOM! Feeweeweewee!

Broadcaster Ron: No no! 'Ere pining!

Mr. Shlabotnik: Ere not pinin'! Ere passed on! This team is no more! He has ceased to be! Ere expired and gone to meet 'is maker! Ere's a stiff! Bereft of life, 'Ere rests in peace! If you hadn't nailed 'em to the perch 'ere'd be pushing up the daisies! 'Is metabolic processes are now 'istory! Ere off the twig! Ere kicked the bucket, Ere shuffled off 'is mortal coil, run down the curtain and joined the bleedin' choir invisible!! THIS IS AN EX-TEAM!!

Broadcaster Ron: Well, I'd better replace it, then. (He takes a quick peek behind the counter) Sorry squire, I've had a look 'round the back of the shop, and uh, we're right out of teams.

Mr. Shlabotnik: I see. I see, I get the picture.

Broadcaster Ron: I got a Cardinal.

Broadcaster Ron: N-no, I guess not. (gets ashamed, looks at his feet)

Broadcaster Ron: (quietly) D'you.... d'you want to come back to my place?

Mr. Shlabotnik: (looks around) Yeah, all right, sure.

A Cubs season ticket holder (known has flannj), recently received the following letter from the Cubs:

Throughout the long, storied history of Wrigley Field, millions of fans have walked through its gates, taken their seats, and cheered on their beloved Cubs. Many, like you, decided to make a commitment to the team by purchasing Season Tickets and to you we want to say a special thank you.

On Thursday, July 8, you and a guest are invited to experience the Friendly Confines, both on and off the field, at our first Season Ticket Holder Appreciation Day.

Walk along the outfield grass. Run the bases. Take a swing or two in our Batting Tunnel Arcade. Relax in our exclusive PNC Club. And take pictures in front of our famous ivy.

Along with these activities, your Season Ticket Account Representative, as well as the rest of our front office staff, will be available for questions, comments and conversation. Some of you have been Season Ticket Holders for almost a half-century. You have seen years of success and years of disappointment. You have seen some of the best players that have taken the field and players whose names are forgotten. For others, this is Year One, just like the Ricketts family. Your name made it to the top of the waiting list and you decided to make a very tangible commitment to supporting the team.

But no matter how long you have been a Season Ticket Holder, you all share one common trait – a passion for the Cubs. For that, we are grateful. We look forward to thanking you in person on July 8.

My family and I look forward to spending time with you on July 8th.

Man, are these guys scared. Scared of what?

The Cubs have been playing to well less than full houses this year. And, without a dramatic influx of talent this offseason, the expectation would be for even more empty seats next year. This letter and event is the first attempt by the Ricketts to try to reduce the number of season ticket holders who say, "You know, the economy sucks and the team isn't very good. Maybe now is the time to do something else with my money."

The Tribune recognized this in 2006. The empty seats led to the firing of Andy MacPhail, the non-renewal of Dusty Baker, and the massive spending on Alfonso Soriano and Tedd Lilly. The Trib recognized that the ability to sell the Wrigley experience was waning and on field product was paramount. They spent and put butts in the seats. Who cared if the team would be any good in 2010, they thought. Just don't let potential buyers see empty seats. It worked.

This letter shows that Ricketts know they are in trouble here. The product on the field stinks and the only way to improve it rapidly would be another huge round of payroll spending. They also know that they already have some big payroll obligations and the still have $425 million in debt that needs to be repaid. One bets they also are going to have to go to their father and explain how the return on investment of 1/3rd of the family's net worth is doing.

The possible silver lining here is that the empty seats will result in major changes in the way the Cubs run their baseball operations. That means changes from Jim Hendry on down.

The fear is that the Ricketts don't understand this. To date, all the changes we've seen have been cosmetic (clean bathrooms and Ricketts Buffalo Hot Dogs) and revenue enhancing (Toyota sign, buying a rooftop). There's nothing there that gives a fan any confidence that the Ricketts have a concept of how to run the baseball side of a baseball team.

If only there was a local model of a sports franchise that changed ownership that the Ricketts could copy...

So, Where Are We?

It's really hard these days to write about the Cubs. The only people who seem to be doing it consistently are the professional media (God bless them for dealing with this team daily), the professional bloggers (there are a few), and Bad Kermit.

But as dreadful as the Cubs are in 2010, there is one upside to their performance:

We're going to find out what kind of ownership the Cubs have in the Ricketts family.

There was a lot of hope in what an ownership change would mean for the Cubs. The biggest reason why was because it was understood that the Tribune viewed the Cubs as programming for their media outlets (WGN-TV, WGN Radio, Chicago Tribune newspaper). Winning was subordinate to profit in their view. Perhaps a new owner would treat the Cubs as their personal yacht. Something to be shown off and bragged about, no matter what the cost.

Well, the early returns are in on the Ricketts. And, no. It's not measured in wins and losses on the field. There was very little they could do beginning the day they took over on October 30, 2009 to change the on-field 2010 team. But there were huge things that could have been done to change things for all the years thereafter.

Over the next few posts, we'll look at what they've done with the Cubs and if the hope that came with them has translated into trust earned.

The 2010 Chicago Blackhawks have the Stanley Cup and are NHL Champions.

That sentence is surreal.

There's only one team in Chicago that has not lifted a championship trophy in the last 25 years.

That sentence is not.

The End Or The Beginning

We watched game five of the Stanley Cup Finals from the comfort of a friend's couch. The crowd consisted of 3 adults and 5 youths ranging in ages from 5 to 14. While the game progressed, I asked the kids how much hockey they had watched in previous years.

The Murtons had watched some. The others, not much. I asked them why they were following this edition of the Chicago Blackhawks if they'd never really watched before? "Well, because they are winning," was the collective response.

So, would you watch next year? Regular season? On a Tuesday night?

The response was a "Maybe." They probably wouldn't sit down and watch it instead of a movie or DVD?

While tonight represents the culmination of what seemed impossible just three years ago, it also has the possibility to be a launching pad the for this franchise. They have a opportunity to actually make an inroad into the sports consciousness of a whole generation of kids. And build a fan base from that that will last a generation.

How Rocky Wirtz and John McDonough follow up on this success will be the key if this run is merely a fun little blip on the screen or the resurgence of a team that was once as popular as any other franchise in this town.

They have a lot of systemic issues to overcome in terms of a sport that most kids don't play (or even know the rules - offsides and icing had to be explained in the 2nd period to one of the kids) and a league that has no clue about national media.

But this is a hell of a way to start.